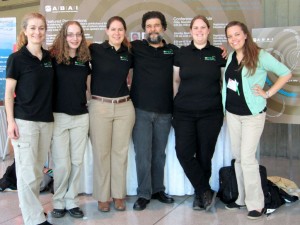 Over Memorial Day weekend 2012, five ORCA members and ORCA advisor Jesús Rosales-Ruiz conducted a six-hour workshop on shaping at the 38th annual convention of the Association for Behavior Analysis International (ABAI). The workshop, Beyond successive approximations: Useful shaping strategies and tactics to improve your teaching, taught attendees techniques for shaping behaviors quickly and successfully, without relying on modeling or prompting, and with minimal error or frustration on the part of the learner.

We received such great feedback about the workshop that we presented it again at ABAI’s 2013 annual convention in Minneapolis, Minnesota. We also have conducted the workshop several times at the University of North Texas for behavior analysis undergraduate and graduate students.

Check out the Behavior Explorer website for further information about PORTL, the shaping game that we use during our workshops. 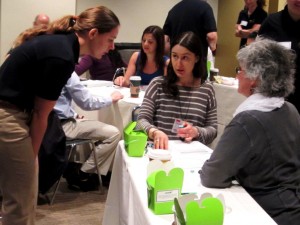 Our hands-on shaping workshop includes a bit of lecture, lots of example videos, many great discussions, and plenty of time spent playing interactive table-top shaping games. The 2012 workshop at the ABAI convention, which was limited to 20 people, was completely sold out. In fact, it was overbooked, with 21 attendees!

Participants at the 2012 workshop ranged from students currently studying behavior analysis, to practitioners working with children with autism, to university professors looking for better ways to train others about shaping. In addition, participants hailed from many different parts of the United States, as well as Sweden, Columbia, New Zealand, and Australia. With such a diverse group of people and experiences, we had some really great discussions about teaching and shaping. The workshop was an overwhelming success and the biggest complaint from participants was that they wished the workshop could have been longer!

The workshop covers a range of topics related to shaping, including:

Participants spend the bulk of the workshop playing a series of hands-on games. Pairs of people work together to practice the concepts and ideas that are covered in the lecture and video portions of the workshop. 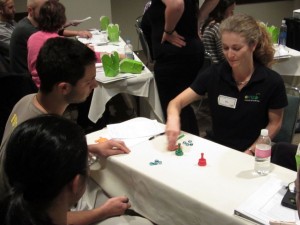 This exercise always generates LOTS of good discussion. At the 2012 ABAI workshop, one participant wanted to train her partner to turn a toy polar bear upside down, then right side up, then upside down again, and so on (similar to how a person might turn a dice while it was sitting on a table). At first, the teacher had a very hard time shaping this because no matter what she reinforced, her learner kept trotting the bear across the table. 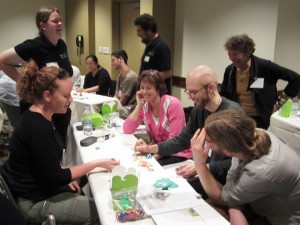 However, even once the corral was added, the participant returned several times to “trotting” the bear across the table. Afterwards, during the discussion, she said she was very hesitant to turn the bear and experiment with other movements. As she put it, bears are supposed to trot, not turn!

One major theme that participants see emerge throughout the workshop is how to structure or arrange the environment so that they can make it easier for the learner to successfully engage in the correct behavior. Also, many participants really enjoy getting to play the role of the learner, as this helps them relate to what their students or clients go through during the learning process.

ORCA members have just as much fun planning and running our shaping workshops as the workshop attendees have during the workshop. Shaping is considered by many to be a difficult skill to learn to do well. Trainers and teachers (who work with both animals and people) often rely on prompting, modeling, and other ways to get behavior, rather than shaping. This can lead to animals and people who are dependent on prompts and who are controlled by the wrong cues. ORCA’s aim is to teach people strategies so that they can use shaping to successfully teach learners with minimal frustration on the part of the teacher or the learner and with minimal errors.

ORCA plans to conduct more shaping workshops in the future, so stay tuned!